Hello!  Thanks for visiting our page however we are in the process of moving and all of our new recipes will be at dontfearthevegan.com.


Thanks again!
The DeRobertis Family
Posted by Don't Fear The Vegan at 11:10 PM 0 comments 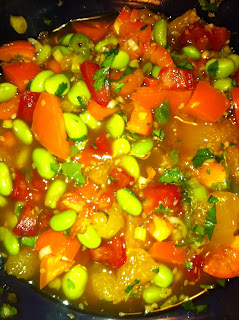 Use this relish over a salad, on lettuce wraps, in spring rolls, with rice noodles for an asian style pasta salad or over mushrooms.

Cut mandarins in thirds.  Mix all ingredients in a bowl up to red pepper flakes. Mix diced avocado in or use slices on the top when serving. Chill at least 30 minutes and serve.
*wheat free tamari makes this gluten free
Posted by Don't Fear The Vegan at 9:38 PM 0 comments 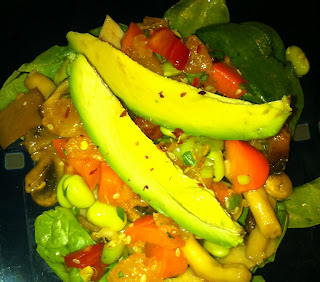 At a Japanese restaurant we had ordered a mushroom spinach saute that had a sweet sesame sauce which inspired this dish, that and the gourmet mushroom medley that I needed to use.  Not sure how I came up with the relish but it worked.  I served it over a bed of spinach .  After tasting the relish I thought it would have gone great with diced avocado if only I wasn't allergic to them, so for everyone else I served the diced avocado on top.  If you like avocado it would go great in the relish!  Serve as a meal for two or a side salad for four.

Cut mandarins in thirds.  Mix all ingredients in a bowl up to red pepper flakes. Mix diced avocado in or use slices on the top when serving. Chill at least 30 minutes and serve.
*wheat free tamari makes this gluten free

Mix ingredients from juice to tamari in a bowl. Heat olive oil in a large over medium/high heat until oil is hot.  Lower heat to medium and saute mushrooms until they begin to release liquid ( 5-10 minutes.) Add the liquid and simmer until mushrooms are cooked, approximately 10 more minutes.
Serve mushrooms over a bed of spinach topped with Mandarin Edamame Relish.  Sprinkle red crushed pepper on top.
Posted by Don't Fear The Vegan at 9:02 PM 0 comments

As the sun begins to visit more often and the temperature is rising in our neck of the woods, talks of gathering with friends begin.  Here are some great, fairly easy ideas to bring along to your next BBQ, Potluck or picnic. 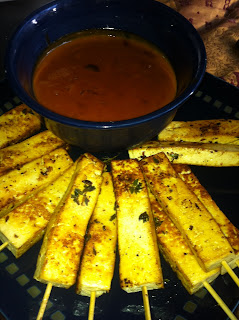 A few weeks ago my daughter and I took a trip to Boston to visit family. We had the opportunity to fly on Jet Blue where we both had our own television screens and access to cable which is something we don't have at home.  She watched her fill of the Cartoon Network and I flipped between Food Network and some home repair channel that I don't know the name of.  The most worthwhile thing I got from watching was a Barefoot Contessa episode that inspired this dish.
This is super easy and tasted great hot or cold.  Mine were cooked on an electric griddle but if you have a grill or are going to a barbecue these would be perfect.  The recipe for the satay yields about 2 cups which is a lot more than is needed for the tofu so you could easily double the tofu recipe or find another use for the satay because it is delicious!  Will need to plan ahead because the tofu needs to marinate for a minimum of two hours.  Overnight is fine too!

So when you use skewers you should always soak them for a half hour or more in water, especially if you are putting them on the grill.  I forgot, but fortunately I didn't burn the house down.  In a bowl mix ingredients from lemon to thyme.  Put tofu sticks in an airtight container.  If you have to stack them make sure to put marinade on each layer.  Pour all marinade in container, seal and refrigerate. I flipped mine a few times while they were marinating.
When ready to cook put each tofu stick on a skewer.  If using a griddle heat to 400 degrees F, slightly oil and cook tofu brown each side then flipping.  I poured marinade over while cooking until all marinade was gone.  Eat hot or allow to cool.  This would be a great appetizer to make ahead and serve at a party (that's what the Barefoot Contessa did!) Serve with Satay.

*wheat free tamari will make this gluten free
Posted by Don't Fear The Vegan at 10:17 AM 0 comments

The Raspberry, Blueberry, Lemony Buttery Cream Thing That Wanted To Be A Trifle! 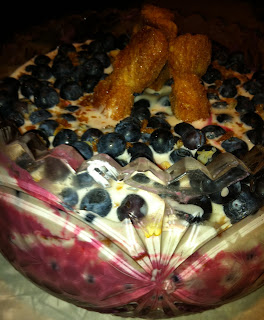 In the past few weeks there have been many post from people mentioning the extreme heat they are dealing with in certain parts of the world.  Here in Seattle on any given day the temperature will go from 50 degrees F to 70 in the matter of a half hour so needless to say we are still using are ovens and eating warm food.  However, I haven't lived here long enough to forget hot California summers, where meals consisted of vegetable trays and cut fruit.  For the next few months I am going to try to balance my cooking and include more recipes where the oven is not needed.  This may prove to be quite a challenge, for I love to bake but it may be the inspiration I have needed to try preparing some of the raw recipes that I find intriguing!
Last year the little vegan and I made blueberry cupcakes with a raspberry icing for our American Independence Day which got me thinking about a dessert that included the same ingredients but didn't need to be cooked.  Searching the net and dessert cookbooks I kept coming up with trifles and thought that it could be done without baking and they are visually stunning.  I was so inspired that I actually went to a second hand store and purchased a trifle dish to make it in.  Unfortunately, non of my layers came out dense enough to really get the visual appeal of the trifle I set out to make nor did they require the trifle bowl that I bought, but it tasted delicious.  On the plus side it was super easy to make, minimal cooking and extremely refreshing which was the ultimate goal.
Some notes:
*For the cookie layer you could use any vegan cookie or even cut up a white cake.  I chose a cookie called a Cafe Twist because they have a light buttery taste despite the fact that they are vegan.  If you have a Trader Joe's nearby you can buy them there and I have also seen them at other stores.
*I opted for frozen raspberries because I couldn't find organic raspberries that were in my price range but fresh would work just as well.
* In the first layer of blueberries I only used enough so it would be seen outside the bowl for the trifle effect.  I didn't have enough to cover the entire layer.  The ratio of blueberries at the end was fine but if you want enough to cover the entire center layer you will need more blueberries, maybe double the amount called for in the recipe.
*Sliced strawberries would be a great addition.  Plus if you looked at the trifle pictures above you could come up with something far more beautiful than mine.
*Serving: We tried it immediately after and it was great but had the texture of melting ice cream.  After being refrigerated overnight it set to a thicker yogurt/pudding consistency and was amazing so I am suggesting you make it the night before and refrigerate for optimal texture.

7oz Cafe Twist (I used Cinnamon) broken in thirds.  I saved 3 whole cookies for the top. Use a Gluten-free cookie to make this a gluten-free dessert
11 oz blueberries

Lemon Cream
In a mixer blend butter and cream cheese until smooth.  Mix in lemon juice.  Slow add in powdered sugar using a sifter or use a forks to get rid of clumps.

In serving bowl cover bottom with half the cookies.  Top with half raspberry mixture. Add a layer using half of lemon cream.  Then use about a third of the blueberries around the edges (see notes above.) Repeat using the rest of the ingredients starting with cookies.  On top of layer use remaining blueberries over top. Decorate with remaining cookies.  In the cafe twist containers there is a lot of crumbs which I sprinkled over the top of the blueberries.  Refrigerate over night and serve cold.
Posted by Don't Fear The Vegan at 12:45 PM 0 comments 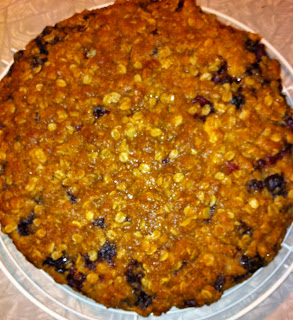 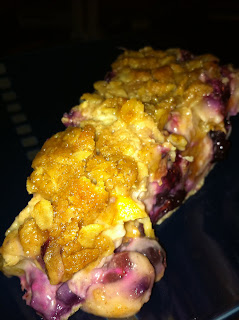 Pie can be such a wonderful comfort food and I have never met one I didn't like but I have not had much experience making them.  Awhile back I purchased two frozen vegan pie crusts with pie making on the mind.  The other day I walked past some super fragrant organic nectarines and had to buy them. I love nectarine and blueberries in crisp so I decided to grab some blueberries also.  In passing someone else that smelt the nectarines commented on how good they would be in a pie.  You could see the light bubble above my head as the idea for this recipe was born.  After reading up on nectarine pies this is what I came up with.
We ate it the first night hot with vanilla soy ice cream.  It was gooey and delicious but didn't hold the shape of a piece of pie at all.  After being in the fridge over night it firmed up and it was slice-able and held the pie slice shape nicely and was still just as tasty!  I started reading up on what it would take to make my own pie crust and came across both a vegan pie crust and Gluten free pie crust (which is also vegan) recipes that I have provide links for just in case you are more adventurous than I am and want to make your own.

Preheat oven to 400 degrees. Whisk together filling ingredients from brown sugar to almond milk. Gently stir in nectarines and blueberries.  In a separate bowl mix crisp topping ingredients from flour to cinnamon with a fork.  Cut in butter with fork until you have a bunch of crumbly chunks.  Pour filling mix into pie crust.  Crumbly topping over top until its evenly covered.  I highly recommend setting on a cookie sheet because mine bubbled over. Bake for 35 to 45 minutes until golden brown.    Remove from oven and put pie pan on cooling rack.  If you are eating hot let sit about 5 minutes.

Get DFV updates by following us

All images and recipes (unless otherwise noted) are property of Don't Fear The Vegan. Please do not re-post or otherwise duplicate without permission.